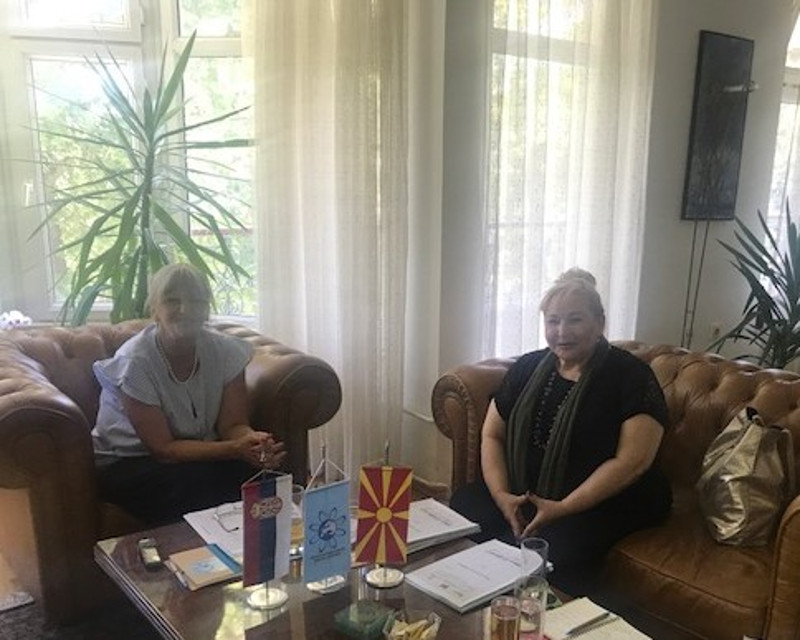 Director of SEEHN Secretariat Dr. Mira Jovanovski Dasic on 1 August had a meeting with H.E. Dusanka Divjak Tomic Ambassador of the Republic of Serbia to the Republic of Macedonia.

Dr. Dasic thanked for the continuous support of the Republic of Serbia to the SEEHN and the 16-year fruitful partnership.

SEEHN Secretariat director informed the Ambassador on the recent activity that took place in Chisinau, when the SEEHN Fourth Ministerial Forum “Health, well-being and prosperity in South-Eastern Europe (SEE) by 2030 in the context of the 2030 Agenda for Sustainable Development” was held.  At the Forum, Member States and partners signed and endorsed the Chisinau Pledge with priorities for improving public health especially in:

Dr. Dasic presented also the functioning of the SEEHN and the SEEHN Regional Health Development Centers (RHDC) which are actually the driving force for achieving health priorities and policies at the technical level. She explained that in order to enhance the work of the RHDC, at the beginning of September this year, there will be a technical meeting in Skopje with the Directors of the RHDC and SEEHN National Health Coordinators (NHC). This meeting will also give the possibility to prepare a roadmap for the RHDC future activities.

Different health issues of common interest have also been discussed with Ambassador  Divjak Tomic and both sides agreed that cooperation in the regional framework is the path for reaching solutions.

Furthermore SEEHN Secretariat Director stressed the importance of the SEE Network activities and future plans of SEEHN, including readiness to continue working on health issues in the Region and strengthening the role of the Secretariat itself.

Besides the regular activities of the SEEHN Secretariat, intensification of the connections with the diplomatic representatives of the SEEHN Member States with seat in Skopje was also recognized as significant for enhancing the communication and sharing of regional health information of interest for the SEEHN member states.