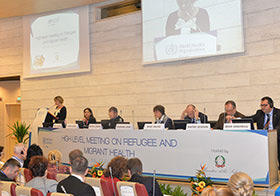 On 23-24 November 2015 in Rome, Italy, upon request at the 65th session of the WHO Regional Committee for Europe this September, the Italian Government and its Ministry of Health hosted a WHO High-level meeting on refugee and migrant health.

The attending Ministers and senior representatives of Member States of the WHO European Region discussed about the numerous public health challenges posed by large-scale movements of refugees and migrants to transit and destination countries. Ms Beatrice Lorenzin, Minister of Health of Italy, opened the meeting with a short statement conveying His Holiness Pope Francis’ welcoming to the Conference and calling on Ministers to bring wisdom, strength and peace to the discussions. She also, paid tribute to the health workers who are stepping up for the challenges of the health service regarding the constantly increasing numbers of refugees and migrants arriving at Italy’s boarders. Representatives of the Office of the United Nations High Commissioner for Refugees, the United Nations Children’s Fund, the European Commission, the European Centre for Disease Prevention and Control and the International Organization for Migration also took part and attended this meeting.

This high-level meeting provided an opportunity for defying the main public health and health system challenges that the host countries are facing such as, preparedness for immediate response and efficient acceptance of large groups that are complex, resource-intensive and potentially socially disruptive.

Dr Zsuzsanna Jakab, WHO Regional Director for Europe, highlighted that this is not a new phenomenon but the scale of migration is and the ageing population and migration are the two demographic factors that will shape the health challenges of the European Region in the 21st century. She explained that the meeting is for the public health aspects of migration – not the political or security aspects. As a WHO Regional Director for Europe, Dr Jakab stated that we as a Region must seek to ensure that all countries are adequately prepared and organized to withstand the added pressures of supporting a mass influx of people, while at the same time protecting the health of their resident populations.

In her concluding comments, Dr Jakab reaffirmed: “As the European public health community, we must do what we can to respond to the needs of those fleeing, to see that they are cared for in both the short and longer terms, and that our health systems are able to deal effectively and humanely with these extra demands, whilst continuing to offer full services to resident populations. We have the tools and knowledge to succeed.”

Dr Santino Severoni, Coordinator of the Public Health Aspects of Migration in Europe (PHAME) project at WHO Regional Office for Europe, addressed the changing face of migration into the European Region and the focus areas of the PHAME project. He said that the goals of the PHAME project are to reduce excess mortality and morbidity, minimize the negative impacts of migration, avoid disparities in health status and access and ensure the rights of refugees and migrants to health care. 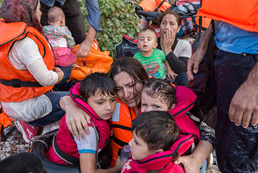 In addition, the panel discussion on the public health aspects of migration defining the challenges presented by communicable and non-communicable diseases. Panellists placed the focus on health care, social services and education which must coordinate to provide effective support, particularly to the most vulnerable. They emphasized the commitment to provide universal access to health services, including services on arrival or on transit routes that are typically provided by NGOs. Dr Nedret Emiroglu, Director of the Division of Communicable Diseases and Health Security at WHO/Europe noted that refugees are more vulnerable on diseases than local population.

Closing the meeting, Dr Zsuzsanna Jakab thanked the Government of Italy for hosting the event and noted that the Regional Office can support Member States in coordinating efforts and working on many of the tasks identified during the meeting.

The migration and health will also be one of the main topics of the 36th Plenary Meeting of the South-eastern Europe Health Network (SEEHN) that will take place in Tirana on December 10th, 2015.