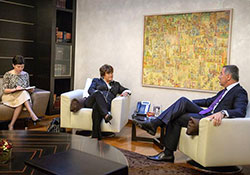 Ms Zsuzsanna Jakab, WHO Regional Director for Europe, made an official visit to Montenegro on 26–28 March 2014, meeting HE Mr Milo Ðjukanović, Prime Minister of Montenegro, and Professor Miodrag Radunović, Minister of Health, and other high-level officials.

At her meeting with the Prime Minister on 27 March, the Regional Director commended the Government for making health a strategic priority and seeing it as an investment in the overall development of the country. She particularly praised efforts to revitalize primary health care, integrating preventive services and health promotion. The Regional Director advised, however, that, despite noteworthy improvements in life expectancy at birth and in child and maternal mortality in Montenegro, further investment is needed to tackle noncommunicable diseases (NCDs) and their risk factors – smoking, alcohol use, obesity and physical inactivity – and the broader social determinants of health.

National committee on NCDs to be established

The Prime Minister expressed his appreciation of WHO’s support in strengthening the health system and confirmed his commitment to the structural reform of the health sector. In addition, a national committee on NCDs would be established, consisting of ministers from different sectors and chaired by the Prime Minister, to ensure a more coordinated and effective multisectoral response.

In discussions with the Minister of Health, the Regional Director underlined the need to ensure that resources are used efficiently to maintain the financial sustainability of the health system, and to take further steps towards universal health coverage. This would mean cutting out-of-pocket payments for health care, as these increase inequalities.

Agreement signed between Montenegro and WHO/Europe

During the meeting, The Minister and the Regional Director signed a biennial collaborative agreement (BCA), establishing work priorities for WHO/Europe and the Ministry of Health for 2014–2015.

The Regional Director’s official visit enabled her to visit the Medical Faculty of the University of Montenegro in Podgorica, meet health directors from all the public health institutions in Montenegro and describe Health 2020, the new European health policy, to them.

At a meeting with Mr Mitja Drobnič, Head of the European Union delegation to Montenegro, the Regional Director stressed the importance of health as a driver of sustainable development and pointed out the compelling need to address the premature mortality due to NCDs by tackling the risk factors and social determinants of health using a whole-of-government approach.