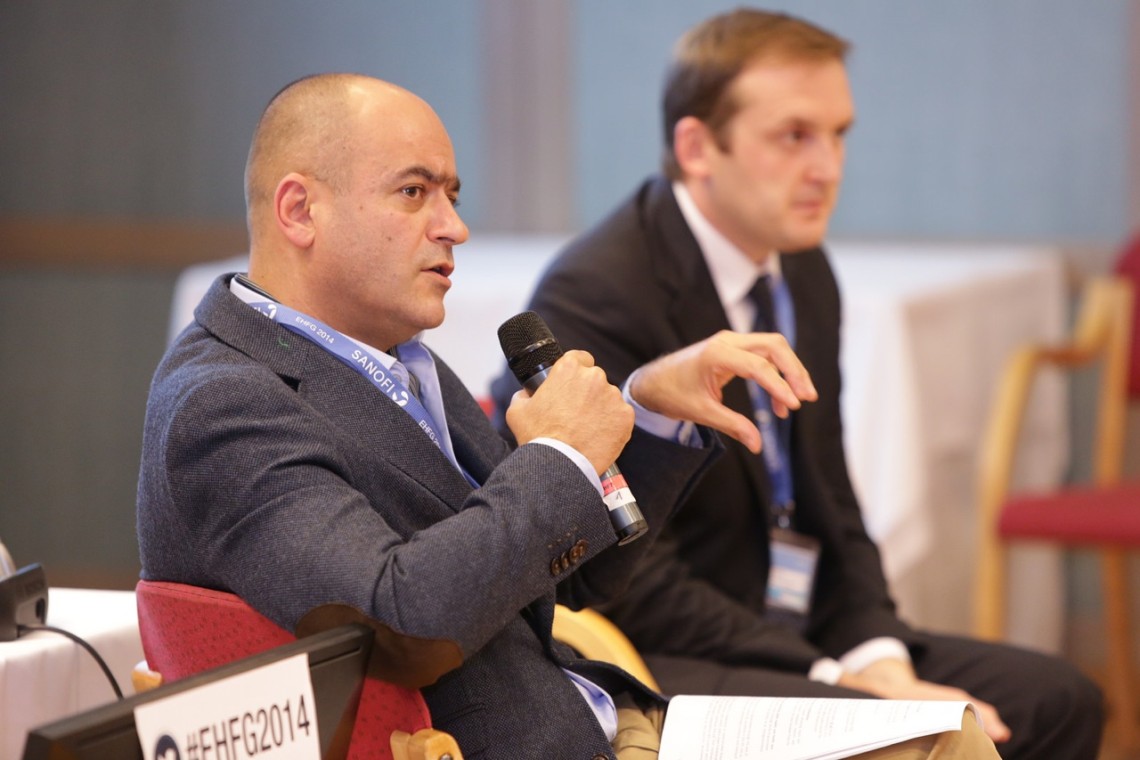 As a main contributor and promoter of the health dimension in the SEE 2020 Strategy, the South East Europe Health Network participated in the leading health policy event in the EU – the European Health Forum Gastein (EHFG) – which was held on October 1-3, 2014 in the Gastein Valley in Austria.

Gathering nearly 600 experts as well as an unparalleled mix of participants, EHFG has proved to be, for 17 years in a row, the chief platform for decision-makers in various fields of public health & health care.

This year’s EHFG program included a joint session organized by SEEHN and its partners WHO EURO and Studiorum. Titled “Health for Jobs and prosperity in SEE”, the session offered a presentation and discussion of the South East Europe (SEE) Growth Strategy and the policy commitment of South Eastern Europe Health Network (SEEHN) to promote the values of health, equity and wellbeing as an indispensable part of the growth and development processes across the SEE Region.

Nand Shani, Senior Expert on Inclusive Growth in the Regional Cooperation Council and Goran Cerkez, Federal Ministry of Health of Bosnia and Herzegovina and representative of the SEEHN Executive Committee, elaborated on the importance of regional cooperation for health-supported inclusive growth in SEE.

Official regional dimension coordinator since 2010, the SEEHN has helped to create dialogue and stronger relationships between the economic, development and health sectors with the sole purpose of improving health and reducing health inequities within and between countries.

Tourism, employment and IT technology were identified as priority sectors for growth in the SEE Region. While sustainable tourism depends on aspects of environment, agriculture, transport, employment and health, the new technologies can prove beneficial to both health and employment opportunities and thus contribute to achieving economic and health targets. In return, a well-functioning health system was once again underlined as crucial for creating consumer confidence, especially in the tourist sector, as it enables not only higher level of sense of security and safety among the industry and consumers when coming to the region, but also inclusive growth.

Also discussed during this session was the involvement of multilateral bodies which have made important contributions to past and current progress. However, given the facts that for many countries the accession to the EU is a main driver for policy reforms and that health has a low profile in the EU2020 high level targets and goals, there is need to bring health more sharply into the accession process through instruments such as the national and regional plans for pre-accession and the related funding mechanisms.

Titled “Health as an entry point for national and local development and well-being”, the second part of the session offered real world experiences from Montenegro, Romania and Slovenia.

Tatjana Buzeti, Centre for Health and Development in Murska Sobota, Slovenia and Andrej Vrsic, Director of the Local Tourist Board in Slovenia showed how health and economic growth can be combined in practice. In the case of Slovenia this was done by promoting sustainable tourism in the North-Eastern wine region, which has also a long tradition in health spa tourism. By putting the focus on active free time and by investing in human capital and infrastructure, not only has this region been redefined and repositioned as a tourist destination, but also the life-style of inhabitants has been improved.

Adriana Galan, National Institute of Public Health, Romania, presented a project focused on vulnerable groups in rural areas. By providing them with entrepreneurial skills to set up their own business, which has resulted in 40 start-ups to this date, the project succeeded at making them understand the links between health and employment. In order to overcome emigration of medical doctors and address existing gaps in the health care system, the Institute also plans to develop partnerships of the healthcare sector with social and education sectors.

Finally, Natasa Terzic, Director of the Centre for Health System Development, Institute of Public Health, Montenegro, shared the best practices from her country. Recognizing that many of the health-related challenges such as demographic ageing and health inequalities cannot be solved by the health care sector alone, a platform for sustainable development was created so to strengthen the perception of health as a tool for growth in other sectors, such as employment. Although it remains necessary to first strengthen the health care system per se before collaborating with any other sector towards enhancing prosperity, this platform is crucial as it brought health to the agenda for the first time in such a context.

The productive session was closed with suggestions to involve academia for evaluating network’s experiences, to include social affairs and to even further strengthen the partnerships with the social sector.

The recordings of the Opening and Closing Plenary sessions of this year’s EHFG can be found here whereas the webcast of the entire SEEHN session is available at EHFG 2014 Workshop 7.

The European Health Forum Gastein is supported by the European Commission and the Austrian Ministry of Health. Its 18th edition will take place between September 30th and October 2nd, 2015.